I like puzzles! I like puzzlehunt-style puzzles the most, but logic puzzles have a place in my heart too.

The first puzzlehunt I participated in was the 2011 CiSRA puzzle hunt (archive.org link), with a bunch of people from Art of Problem Solving. I kept hunting with people from the site for a couple years. In 2013, I was invited into the MIT Random Hall team to do the MIT Mystery Hunt. We didn’t win that year, but we did in 2014 and thus had to write the 2015 hunt. Three of my puzzles made it into the hunt.

Afterwards, I briefly hunted with a Plugh for MUMS Puzzlehunt 2015. In 2016, I got into MIT and started hunting pretty exclusively with my dorm floor, Floorpi, and the associated team ✈✈✈ Galactic Trendsetters ✈✈✈. With the latter group, I’ve also helped run the Galactic Puzzlehunt. After three successful hunts, we are on hiatus for 2020 because we won the 2020 MIT Mystery Hunt, so, as per longstanding tradition, we are writing the 2021 MIT Mystery Hunt.

Other things I’ve done include writing an Introduction to Puzzlehunts in 2019 and leading a team of puzzle authors to write and run the DP Puzzle Hunt, a hunt targeted at those new to puzzlehunts, in 2020.

In my spare time, I also occasionally put puzzles on my blog; mostly logic puzzles in the early days, but more puzzlehunt-style puzzles now. Just to give a feel, here’s a logic puzzle from 2012, one MellowMelon’s Double Back. 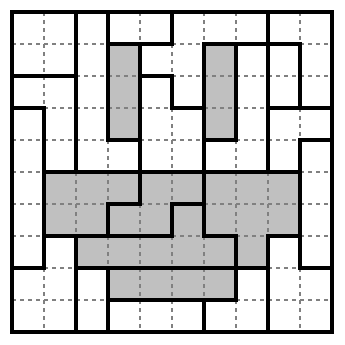 Some puzzles I’ve made:

Some other selected logic puzzles:

An incomplete, vaguely sorted list of all the puzzlehunts I’ve done and teams I did them with: